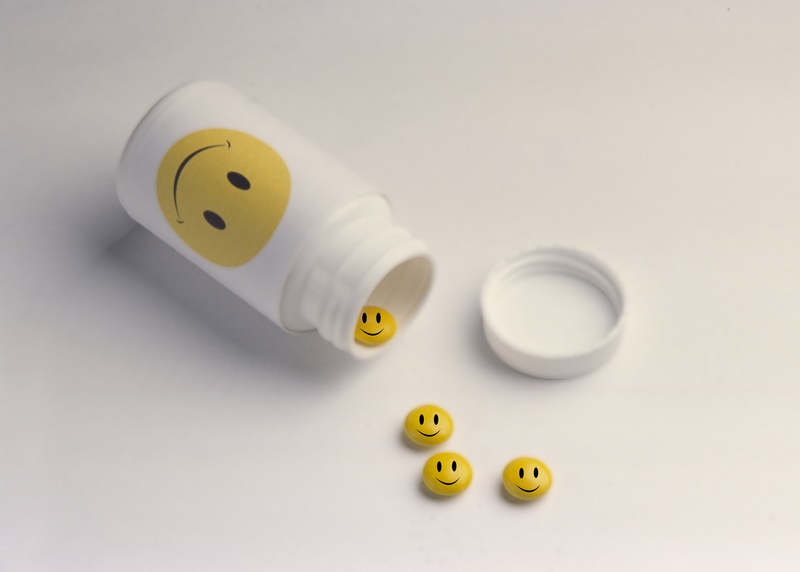 Certain antidepressants can be extremely efficacious for certain pain disorders, most are good for depression, but none of them are “happy pills”.  All of the antidepressants affect at least one of three neuro-amines, namely norepinephrine (NE, sometimes referred to as noradrenergic), serotonin (5-HT, 5-hydroxy-tryptamine), and/or dopamine (DA).

The very first antidepressants developed were mono-amine oxidase inhibitors, after discovery that the neuro-amines listed above affected mood favorably.  These proved to be very toxic and unfortunately have a significant incidence of food-drug interactions, but they are still used today in refractory depression.  The monoamine oxidase inhibors affect all three neuro-amines; NE, 5-HT, and DA.  Previous to this, opioids were used for depression because of their euphoric effects until the 1950’s, followed by amphetamines up until the late 1960’s.  Today, use of opioids and amphetamines for depression is considered taboo and may be associated with legal issues and potentially malpractice.

HISTORY OF ANTIDEPRESSANTS: The new class of antidepressants in the mid-1900’s were the tricyclic antidepressants (TCAs).  These were discovered accidently while pharmaceutical companies were manipulating phenothiazines (chlorpromazine, aka Thorazine® and prochlorperazine, aka Comapzine®) which were used for their psychoactive affects and tranquilizing properties.  Imipramine was the first TCA developed followed by several others.  Cyclobenzaprine (Flexeril®) was being developed as an antidepressant, but was discovered to be too sedating and ended up being developed as a skeletal muscle relaxant.  Cyclobenzaprine is in fact a TCA which was chemically manipulated into amitriptyline (Elavil®).  Amitriptyline was shown to have less sedating properties compared to cyclobenzaprine, and better effect on mood.  Over the years, several TCAs were developed with more or less serotonin and norepinephrine activity; some had both properties and some had more of one than the other.  The mechanism by which all of these work, is to increase the neuro-amine (5-HT or NE, or both) levels within the synapse, by blocking reuptake (sort of like blocking the recycling process within nerves) into the synaptic cleft.  The neuro-amines therefore accumulate in higher quantities within the synapse when taking antidepressants.  TCAs in general are pretty toxic.  They have significant anticholinergic affects similar to sedating antihistamines and atropine.  Along with the sedation, this property also causes a drying affect, the result of which is dry eyes, dry mouth, urinary retention, and constipation.  Also, the TCAs are anti-arrhythmics carrying a high risk of abnormal cardiac dysrhythmias.  Because of all these issues, a safer class of antidepressants with a more desirable side effect profile was sought out.

This led to the development of the specific serotonin reuptake inhibitors (SSRIs), all of which clearly have a better toxicity profile.  The first in its class was fluoxetine (Prozac®), followed by many others.  Subsequently, we saw the discovery and development of more SSRIs and an additional antidepressant class that added NE activity, and in some cases anticholinergic activity.  These included the serotonin norepinephrine reuptake inhibitors (SNRIs, i.e. venlafaxine, aka Effexor®), serotonin antagonist reuptake inhibitors (SARIs, i.e. trazodone, aka Desyrel®), and the atypical antidepressants (i.e. mirtazapine, aka Remeron®).  Their activity is summarized HERE.

The bottom line here is that the drugs were intended to treat depression because of an inherent neuro-amine imbalance, which often times is hereditary.  If a patient is deficient in 5-HT, NE, or DA, or the balance among them, treatment with these medications, after trial and error, can be quite effective, but is generally even more effective for depression in conjunction with psychotherapy.

PAIN:  Several well-controlled clinical studies have proven the usefulness of antidepressants for chronic pain syndromes.  A summary of these agents and their respective neuro-amine activity can be viewed HERE. Most of these studies have focused on neuropathic pain because that pain is associated with damaged nerves that are specifically affected by NE.  Perhaps the most profound of these studies is Max and colleagues (1992), where they studied amitriptyline (NE & 5-HT) to desipramine (NE only) to fluoxetine (5-HT only) to placebo in the treatment of diabetic neuropathy.  Patients receiving amitriptyline or desipramine responded equally well, but those receiving fluoxetine or placebo responded equally poorly.  This then tells us that serotonin activity has little usefulness in treating diabetic neuropathy, but norpinephrine in fact is quite useful.

Based on this information, several antidepressant medications were subsequently developed with an FDA approval for pain.  The first of these was tramadol (aka, Ultram and not marked as an antidepressant).  This one has NE and 5-HT properties plus low level mu-1 receptor opioid agonist activity.  The next one was an SNRI, FDA approved as an antidepressant and as a pain medication; duloxetine (Cymbalta®).  This was followed by the SNRI milnicipran (Savella®) which is only marked for fibromyalgia as of this post.

The newest of the pain medications having significant NE activity (with significant opioid agonist activity) is tapentadol (Nucynta®).  This medication is a Schedule II opioid and is not marketed for depression at all.  Online MPA Degrees has an excellent schematic of commonly prescribed medications/pharmacological classes which succinctly clarifies DEA Schedules I through V.

If a patient presents with a neuropathic pain syndrome (i.e. diabetic neuropathy, phantom limb pain, herpes zoster, radicular back pain from spine, etc.) and they are already on an SSRI, a wise option is to consider switching to an antidepressant with NE activity.  If sedation is desirable for sleep, mirtazapine or a TCA may be viable options, as both have NE activity and cause sedation.  If sedation is not desirable, venlafaxine, (high dose required), duloxetine, or milnicipran would be potential options.

The bottom line here is that all of the antidepressants are potentially useful for depression, but the agents with significant NE activity are most useful for pain management.  This is because NE affects pain neurotransmission along the descending central nervous system pathways.  Serotonin alone seems to have very little effect when treating pain, unless depression alone is making the pain worse.  If a patient is depressed BECAUSE they have pain, simply adding an SSRI will not likely provide much benefit because the blunted mood is a reactive depression from the pain.  Therefore, treating the pain is more sensible.  ANTIDEPRESSANTS ARE NOT “HAPPY PILLS”.  Antidepressants serve to treat depression in patients with an amine imbalance, not a reactive or situational depression caused by pain.

10 thoughts on “Antidepressants are not “Happy Pills””