Or perhaps a conversion to Oxymorphone is plausible.  The answer, NOT LIKELY!  But, this is surely another reason to allow naloxone distribution through the hands of a pharmacist with or without a prescription, after the pharmacist or another healthcare provider assesses the patient for risk of opioid-induced respiratory depression. Allowing naloxone to be purchased from a gas station or variety store for example should never be an option.

Breaking Bad 2.0: Do We Have Another Illegal Drug Synthesis Problem on the Horizon?

Is naloxone the new pseudoephedrine? This question was posed to me by an astute colleague, Dr. David Craig of H. Lee Moffitt Cancer Center.  He inspired our group to formulate this interesting post.

Here to answer the “burning” question is Joseph Gottwald, a PharmD Candidate (aka “4-0h Joe”) headed to medical school in a few short weeks and our very own Dr. Jacqueline Pratt Cleary (aka “Naloxone Queen”) to share their thoughts.  Here’s what they have to share…

At this point most people have seen or at least heard about the methamphetamine (meth) epidemic. Houses blowing up, television drama series’ centered on synthesis of the drug, and monitoring/control of pseudoephedrine sales. Pseudoephedrine does a pretty good job as a decongestant, but we’ve also found out it can be used as a reagent in the synthesis of methamphetamine (crystal meth, meth). Who knew such a widely available OTC medication could result in a highly abusive drug? Well, clearly people in the drug abuse business did. About 1.2 million people reported use of meth in the past year according to the 2012 National Survey on Drug Use and Health (NSDUH).1 Data from the Drug Abuse Warning Network revealed 103,000 ED visits associated with meth in 2011.2 Since cracking down on pseudoephedrine sales, there has been a drop in meth lab incidents/seizures according to data from the DEA. Still, there were 9,338 meth-related lab incidents in 2014.3 The rise and fall of methamphetamine-related lab incidents highlights the very real danger of having medications available without restriction in the OTC marketplace that have chemical structures conducive to manipulation and alteration.

Fast forward to today, with an opioid epidemic that shows no signs of abating. According to the 2014 NSDUH, 4.3 million Americans used prescription opioids for non-medical use in the last month and a whopping 1.4 million Americans joined the ranks of prescription opioid non-medical users in the past year.4 And this is with prescribed “legal” medications. According to the same study, 4.8 million Americans reported using heroin during their lifetime and 212,000 reported first-time heroin use in the past year. But we’re not just talking about abuse here – the CDC revealed that in 2014 opioids were related to 28,647 deaths.5 And overdoses are on the rise, experiencing a quadrupling since 2000.5 The precipitous rise in opioid-overdose related death has underscored the absolute need for widely available reversal agents to prevent death from occurring. Naloxone and naltrexone are opioid antagonists that are able to quickly displace opioids such as heroin from the opiate receptors due to superior binding affinity. These drugs have been used in the emergency department and hospital settings for many years, and have recently seen an increase in prescription use for outpatients that are at high risk of opioid overdose whether from prescribed agents or abused drugs. There has also been a push to get opioid antidotes into the hands of first responders and clinical providers in the community to increase the chance that the antidote is available if an overdose is witnessed. For pharmacists and community members at elevated risk to witness an opioid overdose, it is possible in many states to take a short educational course on the use of naloxone, and be provided with the medication in the event of an emergency.

Having these medications available in the community pharmacy setting has been discussed as a possibility. There is very little risk of harm if naloxone is administered when the cause of overdose/respiratory depression is not opioids. The medication is effective at displacing the opioid with relatively no risk other than a precipitated pain crisis; it would seem inappropriate not to make these medications more available. The advent of auto-injector and nasal devices make administration more simple and crisis-friendly compared to previously available products.

Here’s the catch: take a look at the chemical structures of naloxone compared to oxymorphone, a full-agonist opioid. 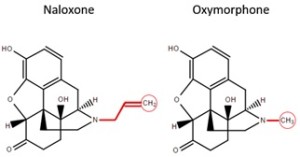 Notice the similarity? The only structural difference between the two is one substituent on the tertiary amine (nitrogen) on the bottom right. Would it really be that hard to set up a lab and convert a widely available naloxone into oxymorphone with an abuse and misuse potential? We investigated this concept and here’s what we have found.

First, it is very reasonable to conceptualize a potential reaction mechanism for this to occur. The mechanism is very similar to the reverse process used to synthesize naloxone from more natural opioid products or their synthetic derivatives. Here’s a potential mechanism below which doesn’t require that many steps:

To see the reaction scheme for conversion of Naloxone to Oxymorphone, click HERE.

Of course with all great (and really dangerous) ideas, it’s not as easy as it looks. We consulted with a professor who conducts organic synthesis research and gathered much of the following information.

To accomplish this reaction, you would need lab glassware, stirrers, ice, vessels for storing and adding the reagents and ideally a fume hood since the chloroformate proposed in the first step will generate hydrochloric acid gas which would need to be trapped. Methyl iodide is considered to be carcinogenic since it is a powerful alkylating agent and should be handled with precaution. There would also need to be a way to analyze and purify the intermediates and final product, so chromatography equipment (i.e. flash columns, silica gel) and access to an NMR and mass spectroscopy would be necessary.  The analysis could be sent out to a lab for analysis, so the majority of this would be do-able in an “at-home” lab.  One of the other things to consider is that reagents like chloroformates are not readily available on the street or in a drug store.  This and the other reagents would have to be ordered from a chemical supplier like Sigma-Aldrich or obtained through illegal means.  Legitimate chemical suppliers are generally very cautious about where things get shipped (i.e. a residential address versus a legitimate business or academic institution), and in some cases are required by law to not ship to residential addresses. Someone thinking of doing this would have to be clever about how they would get access to these reagents.

So it appears the reaction would not be impossible in a makeshift lab built in someone’s basement, but gaining access to some of the other materials as well as assessing for purity of a product would cause some issues. In the case of this reaction, having leftover unreacted naloxone would result in blocking any of the oxymorphone that may be produced. So there are some roadblocks that would inhibit illegal manipulation of naloxone if it were to become even more available to the public. However, the realistic possibility of synthesizing a potent opioid from an OTC medication should cause a bit of pause. So how do we rectify this potential problem? One potential solution is to empower community pharmacists with the ability to issue prescriptions for naloxone devices after proper counseling and training on their use. This would allow for tracking of naloxone sales as well as ensure there is a reasonable need for the device prior to dispensing. We can’t prevent illegal use of naloxone with 100% certainty, but we also need to recognize the benefit of an opioid antidote for preventing the drastic increase in opioid-related deaths. The most recent auto-injector device, Evzio, has reportedly been used to treat more than 600 suspected opioid overdoses from 10/1/14-12/31/15 through the Kaléo Cares Product Donation Program – and this is only reported uses. Greater than 1/3 of the donated auto-injectors (>1000 as of 12/31/15) have been successfully used to reverse an opioid overdose during this timeframe, which has proved to be a lifesaving intervention for almost 10 patients/week.6

We can’t prevent every illegal manipulation of naloxone if it is distributed more widely throughout the community, but given the lifesaving potential of prescription naloxone products for take-home use we also can’t ignore the apparent need for increased availability of an easy-to-use opioid antidote. By smartly introducing a product like this to the community accompanied with appropriate training, we can reduce the risk of harm while providing a much needed service to the public. 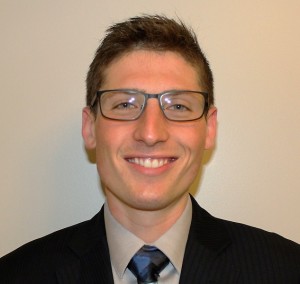 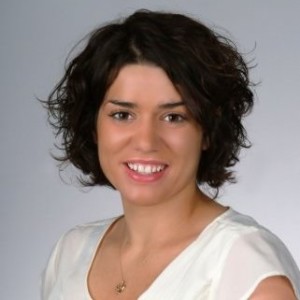 Dr. Pratt Cleary is a PGY2 Pain and Palliative Care Resident at the Stratton VA Medical Center in Albany, New York, under the mentorship of Dr. Jeffrey Fudin. Her research interests include risk stratification prior to and following opioid therapy with emphasis on requisite naloxone qualification for in-home use. She has been a leader in the expansion of the risk index for overdose or serious opioid induced respiratory depression (RIOSORD) tool presenting and educating providers and patients on a national scale.  Prior to completion of a PGY1 General Practice Residency at Sentara Healthcare System in Norfolk, Virginia, she earned her BS in Biochemistry at Furman University and her Doctor of Pharmacy at South Carolina College of Pharmacy, MUSC Campus.  Dr. Pratt hopes to pursue a career in pharmacy academia upon completion of her PGY2 residency training.

20 thoughts on “Breaking Bad 2.0: Is it possible to synthesize Oxycodone from Naloxone?”