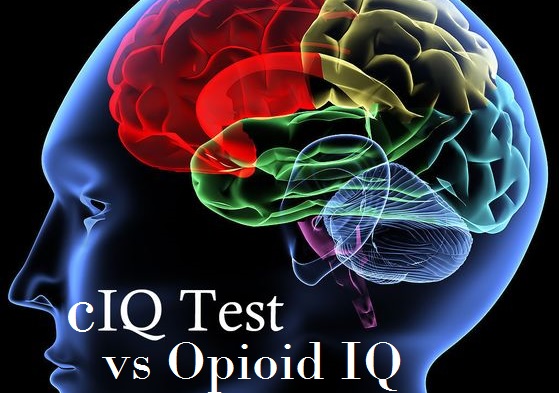 Before you succumb to the newest opioid epidemic, you may want to visit #OpioidIQ.   Allow me to explain.

According to Wikipedia, Collective intelligence is shared or group intelligence that emerges from the collaboration, collective efforts, and competition of many individuals and appears in consensus decision making.

As I navigate through some of the political rhetoric, I can’t help but ponder the time and energy that is variously spent by countless printed and Internet media sources with misleading information about opioids.  It makes me want to develop a new IQ scale specific to opioids.  The perfect name for this would be Collective Ignorance, or cIQ (collective ignorance quotient).  There is no doubt that consensus decision making is alive and well with opioids, as seen by the recent release of CDC Guidelines and the fallout that has occurred.

And so it has happened.  Lawmakers and media muckrakers, the lay public, and even clinicians within various specialty groups are collectively lobbying against legitimate opioid use at the expense of patient safety and increased suicide risk.  And why?  Because they are victims to the newest epidemic, a high Opioid Collective Ignorance Quotient (Opioid cIQ), which of course is inversely proportional to what we all know as IQ.  It’s of particular interest that the CDC’s job is to monitor dangerous epidemics, but they have actually been part of the virus that created this.  Apparently the CDC has been infected with a smart little bug capable of dodging intelligent treatment by pain scholars and good science. Perhaps the CDC has been spoofed by this virus, as the resistance to treatment is incredible.  Isn’t it CDC’s job to squelch such bugs instead of promoting mitosis and growth?

Rather than dwell on the misconceptions of the CDC Guidelines, the move by various states to limit opioids for legitimate patients, the unintelligible use of opioid equivalent doses without consideration to individualized therapy, the expectation that in order to continue opioids chronically one must see “clinically meaningful improvement in pain and function” in all patients when we know that won’t happen with a spinal cord injury or Parkinson’s patient, and, blah, blah, blah…

I’ve asked our prolific guest blogger Dr. Mena Raouf to work with me so we could get this Opioid cIQ blog out in time for #PainWeek2016. And once again, he was up to the task.  Here’s what Dr. Raouf has to contribute…

In the midst of the opioid crisis and policy changes, an important problem that is often overlooked by policy makers, is lack of education and intelligence quotient (IQ) on opioid use. Part of the problem is lack of emphasis on opioid education across healthcare professional schools leading to subsequent deficiency in patient and lawmaker education. In fact, this week some of our pharmacy colleagues, Carroll J, Cleary, JP, Strassels S, and of course Fudin J will be presenting a poster at #PainWeek2016 entitled Analysis of Pain Education Deficiencies Among Student and Recent Graduate US Pharmacists which should be a wake-up call to Colleges of Pharmacy.

Approximately 85% of opioid overdoses are unintentional.1 Therefore, there is a dire need for improving education and awareness on proper use and risk mitigation strategies. A renowned group of clinicians developed educational videos to improve Opioid IQ, reduce cIQ, promote appropriate opioid use, and increase awareness of accidental and purposeful misuse. As a Clinical Pharmacy Specialist, Dr. Fudin expressed his gratitude for another opportunity to work with renowned physician pain specialists having different but overlapping backgrounds, to produce the Opioid IQ series.

But first, let’s tease out the terminology:

Abuse, misuse, dependence, addiction, and pseudoaddiction are distinct phenomena that are accidentally grouped together due to variability and confusion in definition.

It is reported that up to 1 in 4 patient misuse their opioid medications where misuse was defined “as opioid use contrary to the directed or prescribed pattern of use, regardless of the presence or absence of harm or adverse effects”.3 The study did not report whether opioid misuse is intentional or unintentional. Contrary to the belief that misuse is more common with immediate-release (IR) opioids where patients take more “as needed” tablets for pain control, unintentional misuse with extended-release (ER) opioids is a major problem that is often overlooked. ER opioids are designed to deliver a medication over a prolonged period of time. Chewing, dissolving, or crushing the tablets defeats the ER profile and results in dose dumping.4

There have been instances where ER formulations were unexpectedly crushed or cut with no intention for abuse, such as in elderly patients who may crush their medication for ease of ingestion. In an online survey of 1021 chronic pain patients, 65% of the patients reported that they are unaware that crushing, cutting, or grinding the opioid medication can alter the way it works.5 Noted the man age of the participants is 56 years old.

It is not uncommon for patients to split, crush, or grind medications and this may lead to generalization that ER opioid can be handled similar. Consider patients who put all their medications in a pill box and may crush them all for ease of swallowing.

Approximately 6 million US patients experience swallowing difficulties, and with the increase in the older adult population and growing prevalence of chronic pain, this poses a serious safety concern.

An important conversation to have with patients is “how they are taking their medication”. NOT “how many times a day are you taking it” or “when do you take it”, rather discussing how they are ingesting it and whether are they swallowing it whole or crushing it. Approximately 81% of patients reported that they never discussed swallowing difficulties with their physicians.5

Abuse-deterrent formulations (ADF) have been supported by the Food and Drug administration (FDA) developed to encourage proper opioid use. A comprehensive review of ADF can be viewed HERE.  The name may carry stigma some stigma to it for some patients, and it is an opportunity for the clinician to educate patients. In patients with swallowing difficulties, ADF may represent a safer viable option.

You don’t need to have a high Opioid cIQ forever – there is a cure!  We encourage everyone to treat their high Opioid Collective Ignorance Quotient (Opioid cIQ) with a visit to opioid IQ. And of course, as always, comments are welcome and encouraged.