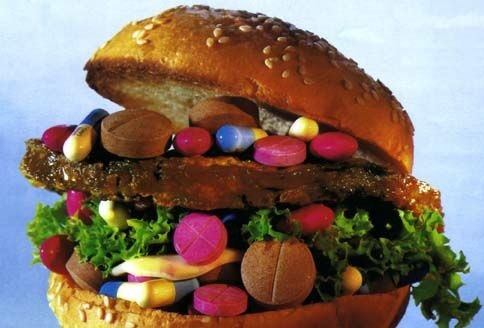 Back by popular demand is Guest Blogger Mortimer Fein to tell us what MEAT and MORPHINE have in common!
Here’s what Morty has to say…

The World Health Organization (WHO) used to create graphs depicting the per capita morphine consumption in countries around the world. Per capita consumption of morphine equivalents is highest in the United States/North America and Australia and lowest in Myanmar, Afghanistan, Zambia and Madagascar. And I ask – where would YOU rather have low back pain, arthritis or cancer? Nothing against these places I am sure they are quite lovely in many ways, but I bet sufferers there would brave the high seas to come here for pain treatment if they had the choice. These WHO data used to imply civility – taken as a sign of how a society cares for its sick and its hurting. It is a testament to the power of perception that in just a few short years these data are now taken to represent the decline of western civilization. America’s consumption of opioids is a sign of its weakness, its softness, its pill popping wimpy-ness. We are no longer civilized and ahead of the rest of the world, we are now little more than a society of junkies, to hear some tell it.

“The US consumes (fill in the blank with whatever percentage you like) % of the world’s opioids,” they exclaim! Never mind that people often include in this rant opioids that aren’t even sold in other countries. It’s like saying 90% of the world’s Japanese food is eaten in Japan. America’s conspicuous consumption is infamous. We may consume 80% of the world’s opioids but we also consume 50 billion burgers per year. Three burgers per week for every single American. I would guess that’s about 80% of the patties if not more. Is anyone proposing bun limits? Time constraints for one’s ability to consume as many burgers in a week as one wants? Anyone monitoring how many times you went to Wendy’s, McDonalds, or Burger King in a month? ”Don’t fill that order, this man just bought a burger yesterday at a burger joint in Michigan. And before I give you this juicy baby let me see check your cholesterol (or your adherence to your statin regimen). The perception of this carnivorous consumption – Americans are fun-loving, carefree folks who love their lipids. Others though would see in these numbers the downfall of western civilization – a sign of America’s weakness, its softness, its fast food popping Wimpie-ness. (sorry).

People will vehemently argue both sides of these issues because, as we all know, perception is reality. The truth, of course, lies somewhere in between these overly rosy or sky-is-falling views. People with chronic pain meanwhile are losing the battle to define themselves and instead are being defined by hostile parties not above distorting data and selective use of evidence. For example, people with pain are not seen as the fun loving, sexy and trim models in the Hardee’s commercials (allegedly) about to consume more calories in one burger than they did all last week, they are seen as the compulsive overeaters buying a bag full of cheeseburgers, stealthily binging on them in their car.

Dan Brookoff, may he rest in peace, used to say, that “if you want to read a book about pain, read the Book of Job.” Job was ruined financially and physically, his family was destroyed, but Job was blameless, a man of integrity. He was made to suffer, yet he remained the perfect person. Can the world not see past the pain sufferer’s physical, fiscal, familial ruin and our own biases and not judge them or their treatments so harshly? If we can get past our biases and perceptions it just might be a sign of our civility.

As always, comments are encouraged and welcomed with enthusiasm.