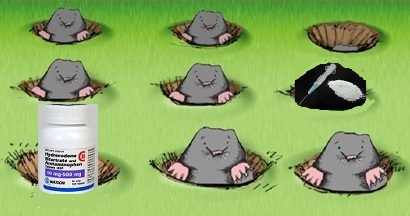 Rescheduling of hydrocodone no doubt has many chronic pain patients concerned.   A barrage of e-mails and other communications over the last several hours have indicated panic among patients with several questions regarding opinions and options.

I am writing this post because I can’t answer the hundreds of e-mails.  I will start this by answering the most direct question asked to me, “What is PROMPT’s position on changing hydrocodone combinations from schedule III to schedule II?  The short answer is, we don’t have a position as of yet.  The short-answer reason for this is that we don’t know what the outcome will be, or if it’s a good or bad thing.  It’s difficult to make an argument one way or the other if data is lacking to support either position.  See PROMPT’s Mission Statement which advocates for recommendations based on validated evidence, which doesn’t exist for scheduling hydrocodone both ways.

It is therefore my personal opinion that Dr. Lynn Webster and his colleagues with the American Academy of Pain Medicine have once again hit the ball out of the park.  They took the high road by not offering a hard and fast position to the FDA; instead they provided  a “[No] Position Statement” writing that they “Encourage implementation of tested, proven, evidence-based strategies, such as public health demonstration models for prescription opioid use that reduces mortality and mitigates untoward risks of opioids in Society.  The Academy neither supports nor opposes rescheduling but takes the position that action is needed whether the schedule changes or remains the same.”  Dr. Webster nicely outlined the potential negative fallout from rescheduling, the potential advantages of rescheduling, and touched on the fact that inaction is unacceptable based on current statistics.”

So, what is my opinion?

I don’t support anything that can potentially harm patients.  I don’t know whether rescheduling hydrocodone will help or hurt the majority of chronic pain sufferers or society, as I believe that for the most part, chronic pain should be treated as other chronic disorders insofar as opioid therapy goes.  That is, extended release formulations are generally better tolerated than immediate release products, they avoid “chasing after the pain” as opposed to preventing it, and they afford extended blood levels such that the pain patient has better hope for a full night of sleep.  Nevertheless, extended release formulations are not without risks!

On the other hand, chronic pain sufferers do have occasion for breakthrough pain, especially if they remain active as we all hope.  If this necessitates breakthrough immediate release dosing, it needs to be done in a controlled fashion, not with 240 tablets of an immediate release formulation each month…this is not “as needed” if it is “always needed”.

What about what I like to call, “acute forms of chronic pain”?  This would include medullary kidney disease, sickle cell crisis, pancreatitis flare-ups, endometriosis, and other disorders.  This is a topic for another blog, but does make for interesting discussion that unfortunately was not contemplated in a big way at the FDA hearings.

Here’s what I really think!  If anyone believes that rescheduling hydrocodone is going to solve the problems they hope to, they will be sadly disappointed (check back here 6 months after it happens, if it happens…maybe I can link a “like” on Facebook for when this prediction comes true).  Some of those that really need it for legitimate reasons will no doubt suffer from the proverbial “Pharmacy Crawl”.  And, it will affect elderly patients in and out of nursing homes and cause logistical problems in such environments most probably creating a springboard to codeine prescriptions.  Unfortunately codeine is less effective, more constipating, has a similar toxicity profile to hydrocodone, but has a significantly [underappreciated] risk of drug interactions (usually, but not always, with antidepressants) that grossly reduces the analgesic effect.

Simply put, those that are abusing hydrocodone will move on to something else, especially if they are smart enough to realize diversion of schedule II’s comes with a harsher penalty; and believe me, many dealers know that.  This was seen in the late 70’s when the popular abuse combination was to inject oral pentazocine (Talwin®) in combination with pyribenzamine.  The wise scientists at Sterling-Winthrop reformulated their product to include naloxone in the tablets, which was later patented as Talwin-NX®.  That solved the problem for a few weeks until heroin use increased along within other abuse options.  After Purdue Pharma reformulated OxyContin®, the same thing happened and heroin use became more prevalent.  An almost comical knee-jerk (or perhaps marketing ploy) by Reckkitt-Benckiser was to include naloxone in their Suboxone® (buprenorphine + naloxone) formulation making an [flawed] argument that if crushed and injected, it would prevent abuse because of opioid-receptor blockade.  Well, guess what, naloxone never gets to the receptor because buprenorphine has a higher affinity (smart move though R-B, but generic sublingual plain buprenorphine is just as good and less expensive).

My personal recommendation to the FDA is as follows:

For those chronic pain folks that have sent panicked communications, the FDA has not yet finalized their decision.  According to Sabrina Tavernise of the NY Times, “If the F.D.A. accepts the panel’s recommendation, it will be sent to officials at the Department of Health and Human Services, who will make the final determination. The F.D.A. denied a similar request by the D.E.A. in 2008, but the law enforcement agency requested that the F.D.A. reconsider its position in light of new research and data.”

Dr. Thomas Sachy, a forensic psychiatrist with expertise in pain medicine has agreed to write a guest blog on the topic of hydrocodone and the proposed rescheduling which will be posted within the next several hours/days.  I’m guessing it will be quite the heated topic!

21 thoughts on “Effect of Rescheduling Hydrocodone is Unknown”