I bet all the regular blog followers thought this had to do with my two recently born grandsons less than two weeks apart. Surprise! This is a unique and powerful guest post by a dear colleague of mine who agreed to selflessly share her lemonade story which fits well into this series and provides many life lessons.  Thank you and welcome Dr. Leah Sera.

I’ve been following Jeff Fudin’s blog posts for a long time. I’m a clinical pharmacist and I did my residency training and practiced for several years in pain management and palliative care, so our paths have crossed a few times at professional meetings, and I’ve always enjoyed reading and learning from his educational blog posts related to pain medications and pain management. I’ve also been closely following his Lemonade blog posts since last summer, months before I could ever have imagined I would soon be dealing with my own cancer diagnosis.

I turned 40 last March, so when I went for my annual checkup, I was told it was time to start getting mammograms. I scheduled my first screening mammogram for December 3, 2021. Afterward, the technician told me not to be concerned if I were called back for further imaging – it was my first mammogram, so there was nothing yet to compare it to, and sometimes the radiologists want to take a closer look at certain findings. When this did indeed happen, I was not worried. I had a diagnostic mammogram to get a magnified look at some calcifications – small deposits of calcium in the breast that light up on a mammogram. Most calcifications are benign, but they can also be the byproduct of growing cancer cells in the breast. The radiologist asked me to come back for a biopsy of the tissue containing the calcifications. I started to worry a bit. I copied and pasted every word of that radiology report into Google and PubMed, trying to understand it.

My biopsy was on December 23, 2021. In our discussion afterward, the radiologist mentioned I would probably need an MRI. I said, “Is that normal…or are you concerned?” The radiologist said, “I am concerned. I want to be honest with you so you can be prepared.” The radiologist asked the technician to walk me down to the breast surgeon’s office to make a consult appointment for early in the new year – just in case. The technician said to me, “worst case, you can cancel if the biopsy is negative.” I said, “That would be the best case.”

Because this was right before Christmas, I had several days to stew (in addition to enjoying a wonderful holiday with my family). The waiting is so hard. The radiologist called to let me know that the biopsy showed ductal carcinoma in situ, or DCIS, considered “stage 0” breast cancer. Most (but not all) breast cancers start in the milk ducts. A diagnosis of DCIS means that the cells in the ducts are cancerous, but the cancer hasn’t spread outside the duct, or outside the breast. After hanging up with the radiologist I got a call from the nurse navigator at the breast surgeon’s office. She wanted to schedule an MRI as soon as possible so that we would hopefully have the results by the time I came in for my surgical consultation on January 3. She was the first person to say the words “breast cancer” to me. It felt surreal.

In addition to the DCIS, the MRI showed a mass that wasn’t seen on the mammogram, and that was suspicious for invasive, or more advanced, disease. There were some suspicious areas in the other breast as well.

We told our four boys. The oldest is 12, the youngest is four. I said, “I went to the doctor and found out I have something called breast cancer. It means I have to have an operation to fix it and then I will be ok.” My oldest had some questions – he knows what cancer is. My other boys were not concerned. After all, the last time I went to the hospital for an operation, I came back with a baby. No big deal. My youngest wished he could spend the night at the doctor’s office (we have a wonderful pediatrician).

The waiting to see the breast surgeon was the worst time of my life. It’s not hyperbole. Knowing that I probably had more going on than the biopsy-proven DCIS, but not knowing the full extent of my disease, was terrifying. I’m not religious, but I bargained with God, with the universe: please let me live to see my boys grow up. If I can’t grow old, please give me another 15 years. At least ten.

One of the things about being a palliative care clinician is that you see lots of things that “aren’t fair.” You see young people with terrible cancers. You learn that bad diagnoses happen to good people who have a lot to live for. You see that people have to say goodbye too soon. I knew that I could be one of those people and I didn’t want to be. I cried with my husband. We were scared.

My breast surgeon explained the diagnosis and my surgical options. We decided to move forward with a bilateral mastectomy. The affected breast would be removed, and the surgeon would prophylactically remove the healthy breast. I would also have a few lymph nodes removed to determine whether the cancer had spread outside the breast.

My husband asked the obvious question, “Is she going to be ok?” The surgeon said, “She’s absolutely going to be ok. She’s going to live forever.” Maybe not, but boy did we need to hear it. Cancer wasn’t going to keep me from seeing my boys grow up. Now my goal was clear. Get rid of breast cancer. Make sure it doesn’t come back.

I met with the plastic surgeon the next day to discuss my options for reconstruction. Because we were unsure whether I would require treatment with chemotherapy or radiation until the pathology report came back after surgery, it was recommended that I undergo reconstruction in two parts. The first surgery would take place at the same time as my mastectomy, during which time the plastic surgeon would place “tissue expanders.” These temporary implants have a port that allows them to be filled with saline gradually over time, stretching the skin and keeping it healthy until the final reconstruction can be done. I managed not to giggle while the plastic surgeon showed me a portfolio of before and after photos. So many boobs!

My surgery was on January 18. Because of COVID restrictions, my husband dropped me off at the hospital entrance and picked me up the next afternoon. My surgery was “uneventful,” as they say. I didn’t have very much immediate post-surgical pain because the surgeon used a long-lasting local anesthetic. I had some dizziness and one significant episode of hypotension that excited everyone for a several minutes. This was determined to be due to a nitroglycerin cream used to increase blood flow to some areas of the skin. I can confirm that smelling salts do really help when you’re about to pass out.

I think I am recovering very well. I have had some pain, primarily due to the tissue expanders (they’re exceptionally uncomfortable, but I’m getting used to them). I’m currently in physical therapy two days a week to help regain strength and range of motion in my arms and shoulders. Since the surgery, pretty much all the news has been positive. My final pathology report showed that the cancer was more advanced than at the initial diagnosis (stage 1 invasive ductal carcinoma – not good, but not a surprise), that there was no cancer in the lymph nodes (it hasn’t spread outside the breast and no radiation needed!), and that my tumor grew in response to estrogen and progesterone (more easily treated!). Another test, called the Oncotype DX, showed that my cancer was at relatively low risk of recurrence and so I would need only hormone therapy – not traditional chemotherapy – also good news! Because the pathology revealed that my tumor was fast-growing, my oncologist told me “You got your mammogram in the nick of time.”

At this time of writing this, I’m 6 weeks post-op and not quite 3 months out from my first – and only – mammogram. My second reconstruction surgery will likely be sometime this summer. I’m about to start my medical treatment. Tamoxifen is a daily oral medication that blocks the action of estrogen at breast cancer cells. I’ll also be starting monthly goserelin injections, which will stop my ovaries from making estrogen in the first place. I’ll be on these medications for at least five years. Essentially, I’m getting a head start on menopause. In reading about this hormone treatment, it seems that medically or surgically induced menopause tends to be more difficult to manage than natural menopause, so my next guest post may be all about the management of menopausal side effects!

I was hesitant to post on social media about my diagnosis. In fact, I hit “send” while I was in pre-op, literally right before the nurse took my belongings away to be stored. Ultimately, I decided that when I woke up after surgery, alone in a hospital room, I would want to read some words of encouragement from those I care about. The response was beautifully overwhelming. Additionally, several friends have reached out to me to tell me that because I shared my experience, they got their mammograms. That has been so meaningful.

Thank you, Jeff, for inviting me to share my story on your blog. I have thought a lot about lemons and lemonade in the past few months. I will wrap up with a plug for screening mammograms: I am 40. I felt no lump. I have no family history of breast cancer. It would have been so easy to put it off. Don’t put it off! Even though so many people have helped me (and will continue to help me) on this journey through breast cancer treatment and recovery, it’s empowering to know I took that first step to take care of myself and may have saved my own life in the process. 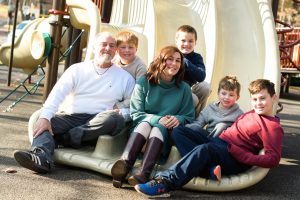 Leah Sera, PharmD, MA, BCPS is an Associate Professor in the Department of Pharmacy Practice and Science and Program Director for the Master of Science in Medical Cannabis Science and Therapeutics (MCST) program at the University of Maryland School of Pharmacy. Additionally, she maintains an active clinical practice in the Transitional Care Center at the University of Maryland Baltimore Washington Medical Center in Glen Burnie, MD.

As always, comments and encouragement are welcome. We would love receiving comments on various social media platforms (Facebook, Linkedin, Twitter), but please also paste those comments on here if you have time!

6 thoughts on “Nourishment with Breastfed Lemonade”