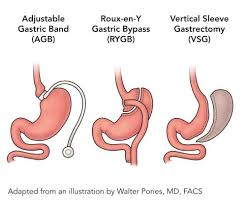 Please welcome this important guest post by Student Pharmacist Megan A. Gerken, under the direction and mentorship of Dr. Jacqueline Cleary…

Bariatric surgeries including sleeve gastrectomy, gastric banding, and gastric bypass can be used to promote weight loss in morbidly obese patients.1,2 In gastric bypass, a smaller gastric pouch is created from the stomach and reconnected to resected small intestine.  Bypassing the entire duodenum and the beginning of the jejunum makes this procedure both malabsorptive and restrictive.3  Gastric banding and sleeve gastrectomy both utilize restrictive processes to reduce the stomach volume and rate of nutrient intake.3  The most common bariatric surgical procedure is Roux-en-Y gastric bypass (RYGB) which like the other procedures is considered effective for promoting weight loss.1,2,3  However, since each surgery has restrictive properties, there is potential for altered medication absorption, through a similar mechanism.

Oral bioavailability of any drug in any patient is affected by drug formulation and patient specific factors.  There are additional changes associated with obesity that can impact the pharmacokinetics of medications including altered expression and function of cytochrome (CYP) P450, conjugation enzymes, enzyme transporters, and tissue concentrations following gastric absorption.4 Adding bariatric surgery into this mix makes it difficult to create a model that successfully predicts the pharmacokinetics for medication in this specific population.  Some medications have been studied to better understand the role that gastric bypass can play in oral absorption, but results show that it is likely impossible to draw a general conclusion.5 This is because the effects of some orally administered medications remain unchanged, some are increased, and others may increase or decrease because their passage through the gut is dependent on efflux pumps controlled by p-glycoproteins. 6,7,8

Currently, limited data is available describing how specific oral analgesics are affected by gastric bypass.  It has been demonstrated that morphine metabolism is not altered in morbidly obese populations, however, there is decreased elimination, which raises the blood levels of morphine-3-glucuronide (M3G) and morphine-6-glucuronide (M6G).6 It is important to note that respectively the M3G and M6G metabolites cause neuropathy and traditional opioid activity leading to potential adverse effects and overdose. When compared with age and body mass index matched control subjects, patients who underwent RYGB had similar area under the curve, maximum concentration, and other pharmacokinetic parameters after oral administration of morphine sustained-release (SR).5 In addition to pharmacokinetic parameters, pharmacodynamic parameters were also measured.  It was found that mean respiratory rate and oxygen saturation were similar between groups, while mean drowsiness was superior in the group that had undergone RYGB.5 Therefore, it was concluded that no dose adjustment is necessary for morphine sustained release (SR) formulations following RYGB surgery.

For morphine immediate release (IR) formulations, the effect of RYGB surgery is much more apparent.  Morphine IR 30 mg was given to patients and subsequently pharmacokinetics were studied before RYGB surgery, 7-15 days after surgery, and then 6 months after RYGB.6  From this it was found that at 7-15 days after surgery time to maximum concentration (tmax) was 2 times lower than prior to surgery and maximum concentration (Cmax) was 1.7 times higher.6  Even 6 months after RYGB surgery, the changes in Cmax and tmax remained significantly altered with Cmax 3.3 times higher and tmax 7.5 times lower than baseline measurements.6  Additionally, the absorption rate (ka) for morphine was found to be four times higher 7-15 days after surgery and at least 20 times higher 6 months after surgery.6  Independent of the loss of BMI that follows RYGB, ka increases significantly with time after surgery, leading to a higher Cmax and an increased chance for adverse effects, including an increased risk for overdose even if the morphine dose isn’t increased.  Given this increased risk, naloxone should be provided to patients using morphine and other opioid medications post bariatric surgery in case the surgery leads to an increase in opioid serum concentration.

Similar data regarding pharmacokinetic changes after bariatric surgery is not currently available for many other analgesic medications.  Until data becomes available, clinicians can use information about the physiochemical properties of drugs in combination with the anatomic changes that occur with gastric bypass to predict which medications are the most reasonable to use post-surgery.  Following the RYGB procedure, a smaller stomach size and shorter length of the small intestine decreases the surface area available for drug absorption as well as the time spent in the small intestine.  This has theoretical potential to affect the proper absorption of extended release formulations.  Due to the smaller size of the stomach pouch that is formed during the RYGB surgical procedure, there are fewer protons being pumped into the stomach, creating a higher pH than that found in a healthy patient.2 Changes to stomach pH can affect the amount of the drug that becomes ionized, leading to a decreased absorption of weak acids and increased absorption of basic medications.2

Besides changes in absorption, other pharmacokinetic changes can be theorized for a patient that has undergone RYGB such as changes to metabolism.  Since the intestines, an important site for drug metabolism, are partially bypassed in RYGB patients, there is theoretical concern that gastric metabolism of certain drugs may be decreased.2,9 Multiple CYP450 enzymes and transporters are located within the small intestines and any drug that relies on these enzymes or transporters for normal metabolism may be affected by RYGB bariatric surgery.  Any bariatric procedure in and of itself does not affect the distribution of medications, but the weight loss associated with it can lead to decreases in the volume of distribution.  Additionally, with a decrease in adipose tissue, there is potential for toxicity of highly lipophilic drugs in this patient population despite previous dose stabilization.9

Due to the higher stomach pH and smaller stomach size that is present following RYGB, stomach ulceration can cause additional complications in this patient population.2 Given this increased risk of complications associated with ulceration, careful selection and use of NSAIDs, if required, is necessary to maintain patient safety.  Since patients with peptic ulcer history are at the highest risk for developing marginal ulcers following gastric bypass surgery, consideration of patient history and comorbid conditions can allow for safe and effective use of NSAIDs for these patients. Moderate use of aspirin and other NSAIDs was not demonstrated to increase the risk for ulcers, but frequent and higher doses increased the rates of ulcers as compared to patients not using NSAIDs.10 Similarly, the use of low-dose aspirin (81 mg) in patients post RYGB did not increase the rate of ulceration as compared to patients not taking any NSAIDs.11  If use of an NSAID is required, liquid dosage forms when available can help to promote absorption. In some cases, if not commercially available, your pharmacist may be able to compound a liquid formulation.  Additionally, ibuprofen, COX-2 selective NSAIDS, or adding on an antacid to serve as a buffer when aspirin is used can promote more rapid absorption, which can be beneficial for patient’s post-bariatric surgery.  Acetaminophen is not thought to be as affected by the change in stomach pH and it undergoes the majority of absorption in a portion of the intestines that is not disturbed by gastric bypass.2  Therefore, it is predicted that acetaminophen pharmacokinetics are not largely changed following RYG.  Similarly, tramadol is thought to be minimally affected by pH changes within the stomach and small intestines due to its relatively high pKa and it is less dependent on bile acids for absorption, which can additionally minimize changes in bioavailability.2

Another option for patients with RYGB is to utilize non-oral analgesic alternatives which may vary based on the indication for treatment.  Since these medications bypass the alterations in gastric anatomy there is less variability in pharmacokinetics as a result of any bariatric surgical procedure. Transdermal options such as lidocaine, buprenorphine (Butrans) and fentanyl are viable options for use in the bariatric patient requiring medications for pain management.  These options by design do not require absorption in the gastrointestinal (GI) tract, making dosing more predictable in patients with an altered GI metabolism.  Other topical options in the form of creams and gels including lidocaine, methyl salicylate, and diclofenac are some additional choices available for use in local pain which would be unaffected by changes to the GI tract following bariatric surgery. Additionally, transmucosal medications which are absorbed through the buccal membranes would provide another way to provide medication to patients following bariatric surgery that would avoid the surgical changes to the stomach and intestines.  Options such as buprenorphine (Belbuca), fentanyl, and sublingual morphine are possibilities for use in acute, chronic, and cancer pain.  Taking patient specific factors into consideration can help the clinician choose between these and other non-oral alternatives to control pain in this patient population.

Given the limited data that is currently available for these patients, there are safe alternative options to conventional oral analgesic medications such as transdermal, topical, and transmucosal products.  Should use of an oral analgesic be necessary, the physiochemical properties of the medication, the anatomic changes that occur with bariatric surgery, and the dosage form, in combination with more frequent monitoring are the keys to understanding the potential pharmacokinetic changes that may occur with the use of oral analgesic options.

Various dosage forms and alternatives as described herein are areas in which pharmacist expertise is too often overlooked. It is a clear opportunity  for pharmacist and prescriber collaboration to benefit the patient. 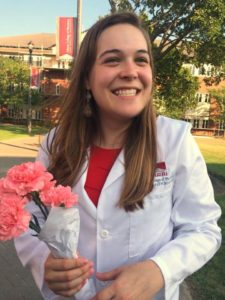 Bio: Megan A. Gerken is a 2019 PharmD Candidate at Albany College of Pharmacy and Health Sciences.  She recently completed an advanced pharmacy practice rotation with the multidisciplinary team at Hometown Health Center in Schenectady, NY under the mentorship of Dr. Jacqueline Cleary.  After graduation she has plans to continue her career as a community pharmacist in upstate New York.