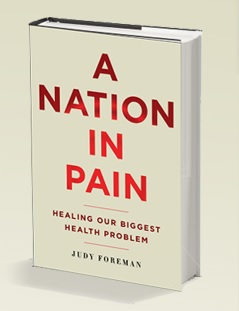 Judy Foreman’s book, A Nation in Pain: Healing Our Biggest Health Problem, is due for release January 30, 2014.  So far, the reviews are incredible!  It is especially encouraging that the book is written by a journalist who herself suffered in pain.  A nice bonus here is that nobody can rightfully accuse Journalist Judy Foreman of bias from Big Pharma, an addiction disorder, or opiophobia.  In this particular case, she is a woman that sets out to tell the whole truth and nothing but the truth based on experience, research, and a lot of interviews with patients, clinicians, lawmakers, and politicians!  The book was 5 years in the making, and acceptable pain management in this country today may be woefully inferior to when she started her research.

Kirkus, Pain-topics, and Publishers Weekly all gave stellar appraisals to the book.

Dr. Stewart Leavitt of Pain-topics.org suitably highlighted the following statements from journalist Judy Foreman; “The complex truth is that opioids, especially opioids for long-term use in chronic non-cancer pain, are probably both under-prescribed for some patients and overprescribed for others.”  “…what I am saying is that government drug policy seems to be lopsided, politicized, stacked against legitimate pain patients, and fueled by public hysteria over abuse of prescription pain relievers. That hysteria, in turn, is fueled by often-misleading media coverage.”  And with regard to opioids, Foreman states that it is a “highly emotional struggle in which much of the ‘debate’ is driven not by scientific facts but by dueling anecdotes of horror.”  According to the Kirkus Review; “Foreman’s text underscores the fact that pain really is an extraordinarily complex phenomenon that requires more research. If we continue head-in-the-sand policies, we will remain a nation in pain.”

In this book, I argue that lack of adequate pain control is one of the most urgent health problems in America. In my research over the last five years, I have interviewed nearly 200 scientists and physicians, as well as countless patients, a few lawyers and a handful of government officials. I have amassed a roomful of books on pain and hundreds upon hundreds of scientific papers.

I have found that there is an appalling mismatch between what people in pain need and what doctors know. Out of 238 million adult Americans, 100 million live in chronic pain. Yet most doctors know almost nothing about it, much less how to treat it. Doctors get only 9 hours of pain education throughout four years of medical school. Even veterinarians get more.

The government, specifically the National Institutes of Health, isn’t much better. It spends only about one percent of its vast – $358 million – yearly budget on pain research, despite the fact that chronic pain is a bigger problem than heart disease, cancer and diabetes combined. Indeed, federal spending on chronic pain is actually going down.

Culture wars over prescription painkillers play into all this, too. I discovered that opioids (narcotics) are like airplane food – not great, but hard to get enough of if you are a legitimate pain patient. And all too easy to get if you are a street abuser. Tragically, politics still means the government – and the press – focus more on punishing abusers than helping patients. Yes, there are roughly 16,000 opioid-related deaths a year, but the press rarely notes that only 29 percent of these involve opioids alone, without alcohol or benzodiazepines. Amid all the prescription painkiller hysteria, the press also pays little attention to the 7,000 to 10,000 deaths a year from NSAIDS, non-steroid anti-inflammatory drugs like ibuprofen.

I got into all this the hard way, with excruciating neck pain that came on, seemingly out of the blue, a few years ago. I am better now. I did what you’ll read about in the second half of this book – opioids, NSAIDS, physical therapy, exercise (lots), meditation, acupuncture, massage, steroid injections, Botox . I learned that nothing really cures pain, but that lots of things can help a little, and that adding them all together can decrease it a bit more.

I have come to believe that the failure to better manage pain borders on “torture by omission.” Many people – whose stories are in the book – can’t get rid of their pain altogether, yet still manage to live extremely fulfilling lives.

Whatever your pain now – or the pain of someone you love – I hope you read this book to better understand your pain and fight for the care you need.

As always, comments from our followers and fellow bloggers are welcome!

9 thoughts on “Pain Purgatory versus Healing Our Biggest Health Problem”