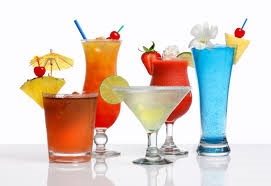 Several opioid prescribing guidelines suggest or require that urine drug testing be the standard of care when prescribing chronic opioid therapy.  Interestingly, these guidelines generally focus on chronic noncancer pain, and seldom if ever address alternatives in anuric dialysis patients as seen in Dialysis, Opioids, and Pain Management: Where’s the Evidence?.  The latter two issues are subjects for subsequent blogs, but suffice it to say that I’ve seen my share of significant opioid diversion in both these populations.

Perhaps a more pressing question is why none of the current guidelines mention urine or blood analysis for monitoring chronic alcohol use, since opioid deaths are significantly more prevalent with concomitant use of alcohol and/or non-alcohol sedative hypnotics.

Here to help address this issue are budding young student pharmacists Mena Raouf and Lisa Dragic, aka #MenaLisa, a dual powerhouse that no doubt will eventually burgeon as pharmacist pain clinician leaders.

Here’s what #MenaLisa had to say…

Alcohol is sometimes sought by patients suffering from pain as a method of chemical coping in the presence of pain and associated psychiatric comorbidities including but not limited to anxiety and depression. Pain management in patients that consume alcohol can become complicated and puts the patient and opioid prescriber at-risk for complications and liability.

Taking a Look at The Facts

Alcoholism is the leading cause of morbidity and mortality in the United States and the prevalence has remained stable with 6% in men and 2% in women.1 It is estimated that the annual cost of US health care expenses related to alcohol (ethanol) consumption is $185 billion.1 More Americans die annually from alcohol than from illicit drugs of abuse. Ethanol is the leading cause of mortality in people 15 to 45 years of age.1 According to the Substance Abuse and Mental Health Services Administration’s Drug Abuse Warning Network (DAWN) there were 438,718 emergency department (ED) visits related to opioid pain relievers. Of the opioid pain reliever ED visits, an estimated 81,365 (18.5%) involved alcohol. It was reported that 3,883 deaths were linked to opioid pain relievers and of that, 860 (22.1%) involved alcohol.2 While we don’t know how many of the subjects were actually prescribed opioids v. using them illegally, testing for alcohol use when prescribing opioids has heretofore been generally disregarded short of simply questioning the patient.  Surely alcohol screening is not a part of the standard urine testing by immunassay panel.

Addiction is a complex disease that affects the brain by altering its chemistry. Drugs cause disruption to the brain by imitating the brain’s natural chemical messengers and some drugs even have similar structures to natural chemical messengers in the brain that cause central nervous system release of various neurotransmitters such as dopamine. There is no one factor that makes a person addicted to drugs or alcohol.  Some anti-opioid zealots have suggested that opioids alone are the gateway to a spiraling addiction disorder in the majority of patients. But, that begs the question of why the world majority are not comprised of alcoholics.  This has been discussed may times by renowned psychologist Dr. Steve Passik; “First, you have to have a drug with rewarding properties. Second, you have to give that drug to a vulnerable person. Third, that person must use that drug at a vulnerable time. In pain management, we have exposure to drugs with rewarding properties and all of our patients are going through a vulnerable time.”

We do know that people are born with certain genes, and these genes may predispose them to addiction. Thus, if you have a rewarding drug (or alcohol) in a vulnerable person at a vulnerable time with this predisposition, it may create the perfect storm for a downward spiral to addiction. Again, while some may argue that addiction is a choice, if genetic makeup weren’t a factor than everyone would be addicted to alcohol and opioids. But, for many, this isn’t the case- some may have an occasional drink and are just fine – same for opioids.

Why Should we monitor alcohol use?

Alcohol comes with drug interactions and could increase exposure and/or potentiate effects of commonly used analgesics. There are pharmacokinetic and pharmacodynamic interactions associated with concomitant alcohol-opioid use.2 One of the most concerning interactions is alcohol-induced dose dumping; dose dumping is defined as “unintended, rapid drug release in a short period of time of the entire amount or a significant fraction of the drug contained in a modified release dosage form”. 4 For instance, concomitant administration of alcohol with Palladone (extended-release hydrocodomorphone, withdrawn from the US market for this reason) resulted in up to 16-fold higher plasma concentrations of hydromorphone.5  In vitro FDA studies revealed that when Avinza (extended release morphine) was mixed with ethanol, there was a more rapid release of morphine.4  The additive central nervous system and respiratory depressant effects from the high opioid peaks coupled with alcohol, which could lead to fatal poisoning.7

But I use non-opioid analgesics, so does it still matter?

The answer is yes! There are safety concerns with concomitant alcohol use and other commonly used analgesics. Combined alcohol use with non-steroidal anti-inflammatory drugs (NSAIDs) could increase bleeding risk and cause eshophageal hemorrhage.8 Alcohol depletes glutathione and could predispose persons to hepatotoxicity with acetaminophen use.9,10 Alcohol could increase the sedative effects of antidepressants (amitriptyline, mirtazapine), skeletal muscle relaxants (cyclobenzaprine, carisopridol) and anticonvulsants (benzodiazepines, gabapentinoids, barbiturates) all of which are commonly used for chronic pain syndromes.9 The concurrent administration of all centrally acting drugs such as opioids and those listed above combined with alcohol can increase the risk of sedation, drowsiness , overall mental impairment, and opioid-induced respiratory depression.

And of course, there are biomarkers that could be used to identify alcohol consumption and monitor for sobriety.

But First…. Let’s take a look at how the body handles this cocktail

Following alcohol intake, 80% is rapidly absorbed in the intestine and 20% is absorbed in the stomach.13,14 There are certain factors that can boost or slow down the absorption of ethanol.  Some factors that may enhance the absorption include ethanol intake without food, dilution of ethanol, and carbonation. Factors that may decrease absorption include presence of food, co-ingestion of xenobiotics such as aspirin and N-butylscopolamine. Once absorbed, it is distributed into the total body water.14,15

Approximately 90-95% of ethanol is oxidized in the liver by alcohol dehydrogenase and 2-5% is excreted unchanged by the kidneys, lungs, and sweat.13-15 Due to the rapid metabolism and ethanol and excretion the time frame for positive saliva, breath, or blood is limited to <12 hours. Thus, the oxidative products of ethanol must be measured in short period post ethanol consumption. Less than 0.1% undergoes phase II conjugation to produce ethyl glucuronide and ethyl sulfate. 13-15 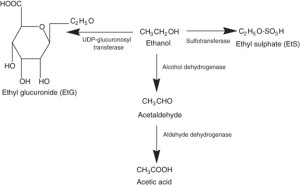 Biomarkers for short-term use

Ethyl glucuronide (EtG) and Ethyl sulfate (EtS) are conjugated direct metabolites of recent ethanol consumption. EtG is formed by a reaction between ethanol and uridine-5-diphospho-β-glucuronic acid which is catalyzed by an enzyme called UDP-glucuronosyltransferase (UGT). 14  Ethyl sulfate (EtS) is formed by conjugation with a sulfate involving cytosolic sulfotransferase.13-15 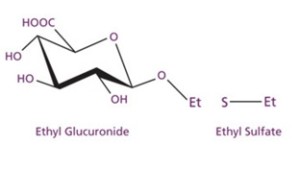 These metabolites can be detected several days after ethanol has already been eliminated. Over the past years, the use of non-oxidative biomarkers to detect ethanol consumption has become of increasing interest because these metabolites provide strong indication of recent drinking. The standard for detecting alcohol use for many years has been blood-based biomarkers and often times they are suboptimal. As depicted immediately above, EtG and EtS can be detected for up to 5 days after ethanol has been eliminated from the body.14 These metabolites are detectable in urine for ≤24 h after intake of ≤0.25 g/kg ethanol, and for ≤48 h after intake of ≤0.50 g/kg ethanol.5 While these biomarkers have many advantages over traditional ways of measuring ethanol, it should be noted EtG can be produced post-sampling if specimens are infected with E. Coli and contain ethanol.17 Therefore, the use of EtS could be advantageous in patients with suspected urinary tract infections.

Biomarker for chronic use

Gamma-Glutamyltransferase (GGT) is a glycoenzyme that transfers gamma-glutamyl functional group of glutathione to accepting molecule.18 GGT becomes elevated with accelerated synthesis or release from damaged hepatocytes. GGT is the most widely used biomarker for alcohol abuse and measured to assess abstinence. It used to assess chronic rather than episodic drinking.18,19 Levels typically rise with chronic heavy alcohol intake and returns to normal limits with 2-6 weeks of abstinence.18 It is important to note that GGT could be elevated with hepatobiliary disorders, smoking, cardiovascular disease, and with certain medications including phenytoin, carbamazepine, and barbiturates. 20,21,22

Other Markers for Heavy Drinking 12

It remains a dilemma in pain management where patients with true pathologies and legitimate pain seek alcohol for chemical coping. The presence of concurrent alcohol abuse disorder does not negate the legitimacy of the patient’s pain complaints, but it may pose safety concerns with the use of pharmacologic analgesics as highlighted above. The patient must be willing to work with the healthcare team to receive treatment for both disorders; that is a choice the patient has to make.

Urine Drug testing has become an important component when treating pain patients with chronic opioid therapy. It is not enough to rely on self-reporting of substance use.23 Urine Drug Testing has become the standard of care because it can help monitor compliance, screen for new or recurrent drug misuse, and assist in diagnosis of patients. Urine Drug Testing is still underutilized.23,24 In fact, one audit of medical records found that only 8% of primary care providers utilized UDT.25 According to the DAWN study, 22.1% of opioid deaths involved alcohol.2 This begs the question of why biomarkers such as ethyl glucuronide (EtG) not included in the standard of care since such an alarming number of opioid deaths are in fact related to alcohol consumption. Discussions of concomitant alcohol as a significant contributor to opioid-related deaths has been largely ignored by the sensationalistic media frenzy.  Little is written in mainstream media to suggest that patients should bear a significant part of the responsibility if they choose to drink while consuming alcohol. It note that that prescribers and pharmacists should diligently warn against alcohol combined with any of the drugs listed above and that patients should seriously heed the auxiliary label warning on the bottle along with handout material supplied with their medications.

In summary, perhaps we need a paradigm shift that considers ethyl glucuronide as part of the standard urine screen.  This could enhance patient safety and altert prescribing clinicians that their patient needs substance abuse counseling with focus on alcoholism to ensure mediation safety and minimize risks.

This article was collaboratively written with Lisa Dragic and Mena Raouf whose bios appear below.

Lisa Dragic is a 2016 Doctor of Pharmacy candidate at Temple University School of Pharmacy. Lisa is completing her last professional year as a student pharmacist with an interest in pain management, addiction, infectious disease, and palliative care. She hopes to complete a PGY-1 and PGY-2 pharmacy residency.  Lisa aspires to be a leader in her chosen profession with focus on patient advocacy.

Mena Raouf, a 2016 PharmD Candidate at the Albany College of Pharmacy and Health Sciences completing his last professional year as a student pharmacist, with a concentration in Nephrology. Mena moved from Egypt 5 years ago to start pharmacy school and career in the U.S.  He hopes to complete PGY1 and PGY2 Pharmacy Residency and practice as a clinical pharmacist specialist. He is currently under the mentorship of Dr. Jeffrey Fudin studying pain management.

12 thoughts on “Should alcohol monitoring be a standard of care when prescribing opioids?”