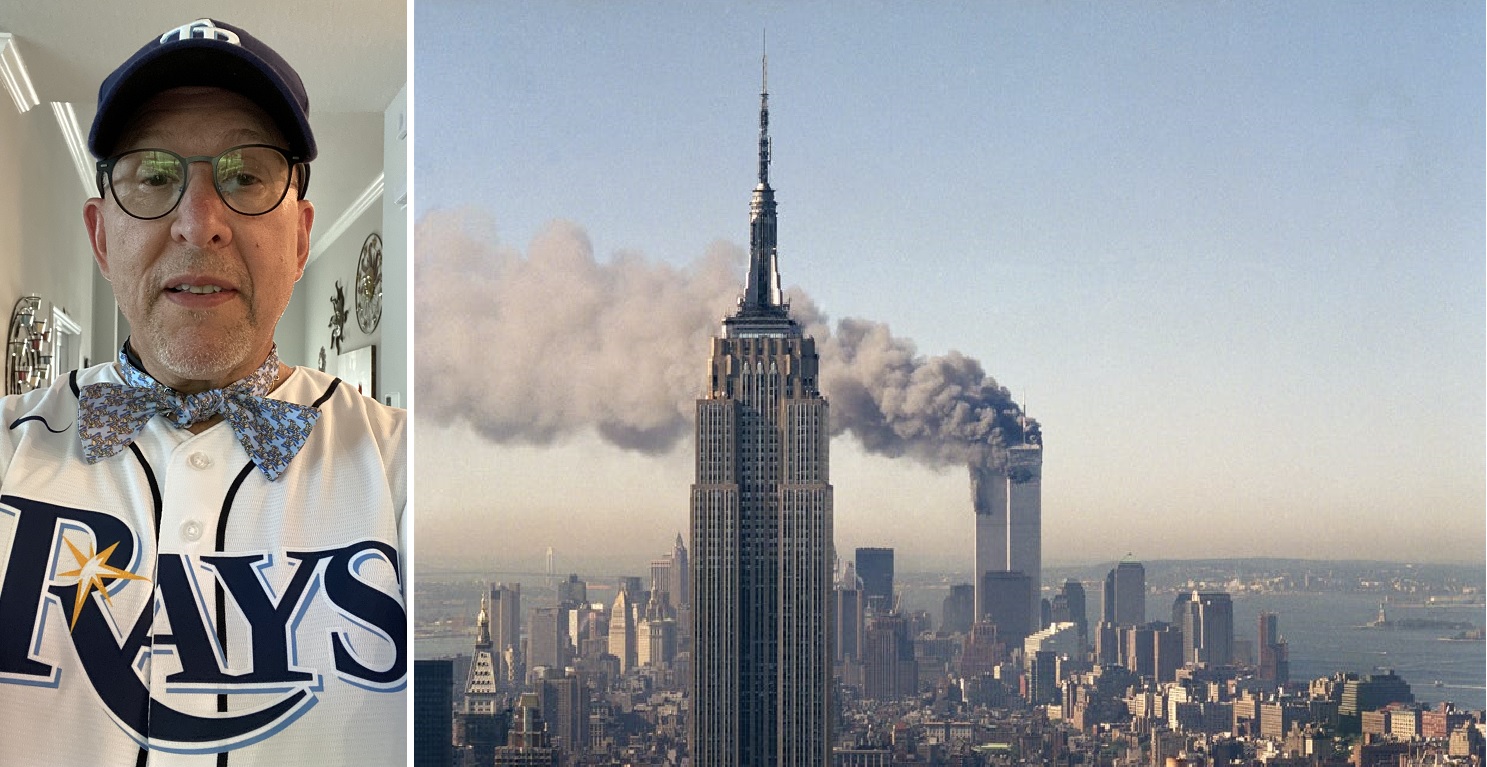 In this blog, Steven Passik, PhD, a clinical psychologist with many years of experience in cancer and non- cancer pain, shares his rather unique experiences from 9/11/2001. While his is not a story of pain per se, the emotional pain we all experienced that day lingers with us even 2 decades later in our collective memories. So many of our patients suffering with chronic pain carry with them not only this collective trauma but the emotional pain of traumatic memories related to how they came to suffer with pain. As we all know, the treatment of pain must take into account emotional pain and address it. Perhaps the fact that we all experienced our own version of this collective trauma can give us empathy for people with pain in their struggles.

On that tragic day we all experienced a massive trauma; in the time after, we as Americans were united as one even though we all had our own version as we uniquely experienced the day. It is difficult to believe that twenty years have passed since the terror attacks that occurred on 9/11/2001. Images of the tragic events of that day have seared their way into all of our collective memories – the sights and sounds of the events in NYC, at the Pentagon and in Shanksville, PA, cannot be forgotten. We couldn’t forget them even if we wanted to, as those who are traumatized sometimes desire to do. Additionally, anyone over the age of 2 or 3 on that day also can vividly recall where they were and what they did when they learned of the tragic events and then, horrified, sat glued to the 24 hour news programs for days to weeks. I didn’t live in my hometown of NYC at that point in my life but my family still did and my brother worked in a building adjacent to the World Trade Center – one which later had to be leveled. It was difficult seeing my city being attacked and I later breathed a sigh of relief when my chronically tardy brother was late getting into town from his home in Long Island that day and was safe, having never gone all the way to his office.

I was up in the air on the morning of 9/11/2001. Indeed, my day started not too far from the Pentagon at a Marriott in northern Virginia. The day and evening before I had been busy, doing things that I traveled frequently back then to do; during the day I had been in Bethesda, leading a committee at the National Cancer Institute responsible for updating and editing online supportive oncology information that we created (I was a psychologist working with people and their families with cancer at that point in my career) and in the evening I gave a dinner presentation on pain management at a DC restaurant. Funny, but I have a vague recollection that someone I was chatting with before the program said something odd about how much flying I did – something to the effect of wow, you’re really tempting fate (!). I shrugged it off at the time but again, like memories related to trauma, I can’t forget it since.

The very early morning of 9/11 I had to get up and out and return to Indianapolis to my practice working with a group of oncologists where I provided support to the patients and their families. And, I was also supposed to leave again that evening to give another dinner program in NJ. I was tired and a little hung over from the wine the evening before, when I noticed that my phone was barely charged because I hadn’t plugged it in before going straight to bed upon checking in to my room. I flew on US AIRWAYS from DC to Philly and connected from Philly to Indy. The first plane hit the first tower while we were up in the air. And the only sign that things were amiss was when my flight landed over 45 minutes early in Indy (we must have made a beeline as other flights were grounded). Then my pager, which received news updates from CNN, started to tell of the morning’s events. I read one out loud to the person sitting next to me in first class with whom I had been making small talk during the flight (more on this later) and people began to react. At the time, it seemed to have been a terrible accident as it was being reported. People quickly, got their things, deplaned and ran straight to the US AIRWAYS club and watched the rest of the horror go down. I remember thinking, Indianapolis has some nationally significant landmarks like the Indianapolis Motor Speedway, could this be a target? And military pay is processed in Indianapolis, could we be targeted because of that? I remember driving to my apartment in downtown Indy watching the skies above me for low flying planes. Meanwhile my family and friends began frantically calling when my phone came back to life plugged into my car’s power. I also phoned the person in charge of that night’s dinner program in NJ to let them know that I wouldn’t be flying out that night or anytime soon. Interestingly, perhaps representing the disbelief so many of us felt as the events unfolded, the person said, “It’s early morning, let’s play it by ear.” I think I responded by saying one of the worst days in American history was unfolding and I’m sure there will be no audience for anything I had to say that night even if I could get there.

But now back to my seat mate. In the 20 years since I have replayed the events of the flight and thought about this woman many, many times. For one thing, I was on a strict diet then and drank a ton of water and had to get up to go to the restroom several times during even this short flight. It gives me the willies to think about whether the flight crew was eyeballing me as I made my way to the restroom right outside the cockpit so often for fear of what I was up to. But in between these trips I had a very nice talk with this woman from Boston who had also connected in Philly and who was on her way to Indy for the first time. She hadn’t been flying much recently as she had just given birth to her first child, a son, 3 months earlier. Indeed, this was her first business trip and first time she had been away from her boy. When I asked where she was going to be staying she said, “Oh no, I’m not staying, I have a few meetings and then I am back out to the airport and want to be home in time to put my baby to bed.” As soon as we all deplaned people scattered more quickly and desperately than is typically the case as all wanted to touch base with their loved ones and learn more about what had been happening. I never spotted her again.

I returned to travel not long after the events of that day. I had a trip to western Canada planned for business pretty much right when flying was allowed again. I think getting back up on the horse so quickly helped me not become avoidant and more traumatized. I remember on that first flight, the pilot said on the PA, introduce yourself to the people around you, shake hands and bond. We all understood that he was saying this because, perhaps, the hijackers on 9/11 had counted on us all having been schooled since the 1970s to sit quietly and not challenge them and that airplane social norms didn’t generally include much bonding. He then added, if someone makes a false move find something heavy like your laptop bag and throw it at them!

But my mind often goes back to that woman and importantly her 3-month-old son who is now just over 20. I often thought about when was she able to get back home? Was there a long delay for her? Did she have the foresight to immediately rent a car and drive back? Was she further traumatized by her unplanned separation from her son? How did this play out then in how he was raised and how she and her husband parented him? What was he told about these events and what position did these memories then play in his developing psyche? You see, I grew up in a Jewish neighborhood in Brooklyn and had friends whose parents had been holocaust survivors. I saw firsthand how their trauma could be transmitted generationally to their kids and in particular with regard to the nervous and clingy attachments that existed between them.

But his very existence is also healing to me and a sign of hope and our ability to get past such terror. I think about whether he became a marine and is dedicating his life to fighting terror and keeping his country safe. Does he plan to study political science and become a diplomat? Or did he avoid such pursuits entirely as a way of not giving the terror his parents experienced too much sway in his life. He has grown up in a completely post 9/11 world and his earliest experiences were colored by that day in the most intimate and nonverbal ways in his connection to his mother and how she might have dealt with the separation and trauma herself.

One thing I know is this; he is very much loved by his mother. She was in the midst of taking two flights out and then after a few hours of work was going to take two flights back all to not miss being able to put her child to bed that night.  She hadn’t wanted to be away from him and yet the world changed while she had been. I hope he feels her love every day. It is that spirit of love and devotion to family and one another that is needed in reconciling ourselves to the events of that terrible day and in healing the divisions that have cropped up since. We all Americans were as one for a time after 9/11 happened. I hope if we emulate the lady from Boston we can all be again.

As always, comments are enthusiastically welcome!