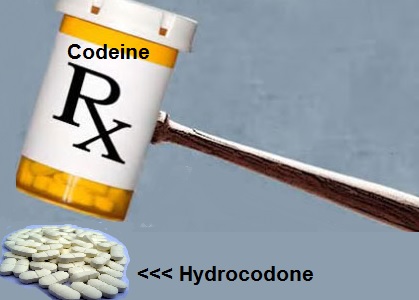 We asked Dr. Fudin what his position is on the newly rescheduled hydrocodone in NYS.  His answer was that he didn’t have one yet because there is no sample data on which to offer judgement.  But he added, “perhaps the bold move by NYS will serve to validate or invalidate the rescheduling at the federal level.  “Make no mistake, codeine sales will surge, as the only other two schedule III options are now buprenorphine transdermal (Butrans®) and pentazocone (Talwin-NX®).  Buprenorphine transdermal has no usefulness for acute pain, and pentazocone has significant toxicity issues”.

As a student pharmacist who has worked in a community setting for 4 years I (DZ) am acutely aware of the recent opioid trends.   Since February 23, 2013, the day that all hydrocodone products became treated as CII in New York State, I have been observing the impact it has had on chronic pain suffers.   It has been about three weeks since the change, and already I have noticed differences in prescribing patterns used to navigate around prescribing hydrocodone products.

As predicted above, there has been a sharp increase in the number of acetaminophen/codeine prescriptions.  Before the rescheduling, the only time I saw prescriptions for this medication was from an ER or urgent care for 20 tablets, and usually for pediatric fractures.  Now, it is common to see quantities up to 180 tablets per month.   In fact, this past weekend, the pharmacy ran out of tablets for the first time ever! Luckily, the patient had some left over from his previous refill since he did not need them as often as prescribed.

There are pharmacokinetic/pharmacodynamic reasons why I believe that acetaminophen/codeine is only being prescribed out of convenience and not to optimally treat the patient’s pain.  First, codeine has a higher rate of gastrointestinal side effects like constipation and nausea compared to hydrocodone.  Secondly, codeine must be metabolized through CYP2D6 to methyl morphine for it to have analgesic activity.  This may lead codeine patients to exposure of potentially problematic interactions, the most common of which include some antidepressants and psychotropic medications.  Even certain over-the-counter drugs and natural vitamin supplements could inhibit this enzyme leading to decreased efficacy.   Segments of the population have more or less 2D6 enzymes [polymorphism] that affect the rate of metabolism, and therefore codeine is a sloppier option compared to hydrocodone.  Finally, codeine is less efficacious than hydrocodone, but it still has 5 allowable refills in NY and hydrocodone no longer has this option.

The change in law may curtail the (ab)use of hydrocodone, but despite this Pyrrhic victory, drug abusers are still able to obtain the opiates they desire whether it be from acetaminophen with codeine or going to the streets to obtain more dangerous alternatives.   Since the change in law doesn’t stop addiction, a substance abuser may obtain a substance by stealing it, doctor shopping or buying it on the street.   This leads vigilant family members to contact community pharmacist asking to identify a drug they found in their child’s backpack and the pharmacist has the unfortunate responsibility of telling them it’s a prescription opiate, amphetamine, or benzodiazepine.   Also, until the initiation of ISTOP there is no way to track a cash paying patient from visiting multiple doctors/emergency rooms and pharmacies. The initiation of ISTOP may help deter some of the abuse but then what happens?  Maybe an increased use of heroin or codeine product abuse (purple drank anyone?). For those not in the know, “purple drank” is codeine/promethazine cough syrup mixed in with some sprite.  This “whack-a-mole” affect that may result in abusers moving from hydrocodone to other substances which is in part outlined in another paindr.com blog, Effect of Rescheduling Hydrocodone is Unknown.

So where does that leave the elderly, the immobile, and the housebound patients if they want to remain on hydrocodone? It leaves them praying that their doctor mailed their prescription to the right pharmacy on time, and that we opened it before they run out.  Opening mail has never been much of a priority for me (DZ) at the pharmacy especially since we are such a high volume store but since the rescheduling we have been much more diligent about opening envelopes from prescribers.  Alternatively, patients have the option to drop off their prescription monthly.

Perhaps the most important consideration here is that the new regulation has not corrected the improper use of pain medication.  Most patients are still not receiving the standard of care from the provider when it comes to pain management.  With the switch from one short-acting opioid to another and the need for hundreds of tablets a month, the patient is still left in the predicament of experiencing breakthrough pain, suboptimal pain control, risk of addiction, and diversion.   When patients were able to have refills on their hydrocodone scripts, they most often consistently fill them on the date due.   This could be indicative of someone needing to use the medication around the clock in a vain attempt to control their pain.   It makes you wonder what exactly the prescriber is thinking when a patient is taking up to 12 tablets a day to control pain when they have the option to take as little as 2 tablets of morphine SA or oxycodone SA or 1 patch of fentanyl every 3 days to achieve more consistent pain relief.  The necessity of consistent serum levels of opiates is contingent on compliance, and the best way to ensure this is to use extended release medication.   When a patient is taking a medication, “as needed”, it can lead to the patient taking more of the medication one day, then backing off since their pain is under control, then needing to take more since their serum levels dropped down.  This kind of pain treatment leads to a patient having “bad days” and the need for dose escalations on opioids more frequently.

In summation, rescheduling hydrocodone has already affected the prescribing habits in just 3 weeks.
The authors believe that the treatment of chronic pain with hydrocodone will be replaced by a worse option.   At least in New York State, the best way to change the prescribing habits of doctors will likely be the ISTOP system up and running and by educating healthcare providers about chronic opioid use.

We would like to hear from other pharmacists that are seeing similar trends and prescribers and patients that have been affected.

Kyle Donovan, Pharm.D. Candidate 2013 is a Student Pharmacist at the
Albany College of Pharmacy and Health Sciences.  He has worked at the
same chain pharmacy for just over 4 years as a Student Intern.
When not practicing pharmacy, Kyle enjoys: basketball, golfing,
reading and spending his free time with friends and family.

Danielle Zanella, Pharm.D. Candidate 2013 is a pharmacy student
at Albany College of Pharmacy and Health Sciences.
When not practicing as a Student Pharmacist in the
community setting, Danielle enjoys spending time
with her family and dog, baking, swimming and reading.

2 thoughts on “Will Codeine be the New Hydrocodone in New York State?”